Your booking
The holiday home is not available in the selected period.

Select a green date in the calendar or
change the length of the stay.

Rømø and Mandø are located off the west coast of South Jutland. Both islands are surrounded by the Wadden Sea National Park, which today is a protected nature reserve. Because of its location, the Wadden Sea is an important "resting place" especially for waterfowl and wading birds during their annual migration, and an important breeding and overwintering area. Renting a holiday home on Rømø or Mandø will provide you with the perfect base from which to explore these two fantastic islands during your vacation.

When you rent a holiday home on Rømø or Mandø, there are loads of attractions to visit. Within just a short distance, you will find attractions such as:

• The Museet Ribes Vikinger (Museum of Ribe's Vikings), an exciting culture-historical museum about the Viking and Middle Ages in Ribe and in the southwest of Denmark.

• The Wadden Sea Centre is an interactive centre where you can learn about the fascinating Wadden Sea region that stretches 500 km along the Danish, German and Dutch coasts.

• Universe Adventure Park is a science park that is full of 'out of this world' experiences and great attractions for the whole family.

If you drive a little further, you will find attractions like our well-known LEGOLAND® and Givskud Zoo. If you rent a holiday home with DanCenter, you'll receive a discount on many of Denmark's most popular attractions. Here you can see the attractions on which you get a discount, when you spend your holiday at a DanCenter holiday home.

Rømø is Denmark's tenth largest island, but only has around 700 permanent residents. That changes drastically in the summer, when a lot of holidaymakers rent holiday homes on the island. DanCenter holiday rental has approx. 120 holiday homes on Rømø. Rømø is connected to the mainland by the Rømø dyke and the island is particularly known for its fantastic nature. Here, you will find among other things beautiful and incredibly wide sandy beaches. Almost 90 % of the island consists of nature and large areas of it are protected.

When you vacation in a holiday home on Rømø, you can enjoy things such as the annual jazz festival or the dragon festival, which take place in June and September respectively. The island also has many beautiful nature trails which are suitable for cycling and hiking. There are also several places where you can rent a horse on the island. Because of the island's lovely scenery, in 2009 Rømø was used as the backdrop for some of the scenes in the American movie 'The Ghost'.

Between Rømø and Fanø, you will find the small island of Mandø, which today only has around 40 inhabitants. Here, it is the tide that determines when the island can be visited. So the island is only accessible via Låningsvejen, a rough gravel road that can only be used at low tide. In contrast to the larger islands of Rømø and Fanø, the scenery on Mandø is a lot more uniform in character. The landscape is dominated by open marshland and there are only a few trees here and there. Mandø is a cosy little island, rich in wildlife, especially migratory birds. If you don't want to pit your wits against the tides, you can take the bus to Mandø, which leaves from the Wadden Sea Centre in Vester Vedsted. As Mandø is a small island, DanCenter has only a few holiday homes for rent.

You will also find many other popular holiday home rentals close to Rømø and Mandø. You can, for example, rent a holiday home on Fanø or see more

You can also visit one of Danland's holiday centers on Rømø. A holiday at Holiday Center Rim Romø offers facilities such as an indoor swimming pool and children's pool, sauna, playroom, games machines and a fitness center. Outdoors, you will also find a swimming pool and playground, bouncy castle, mini golf, etc.

At Danland's Holiday Center Rømø Resort Holiday Center and Wellness you can pamper yourself in the large wellness centre, chill out and relax. Here, you will also find a swimming pool and spa. The outdoor activities include playgrounds, a bouncy castle, bike rental, exercise machines, a multi-purpose sports court and more.

We begin at the sourt-west part of the country with the wide marsh land and the Wadden sea which is part of UNESCO's World Heritage List. A good way to experience the area is by walking the Wadden Sea or trying an oister or seal safari. Rømø is southernmost island of the Wadden Sea and it has some of the widest sandy beaches in Europe. North of Rømø, located across the sea from Denmark's oldest town Ribe, you will find Mandø, which is another of the natural gems of Denmark. And last, but not least, there is the old holiday island Fanø with its charming towns Nordby and Sønderho along with the magnificent beaches at Fanø Bad and Rindby Strand.

Just a few kilometres north of Fanø you will find some of Denmark's most popular holiday areas like beads on a string. In Blåvand, Henne and Vejers you will find fantastic beaches and endless horizons. The towns are especially known for their beach life, shopping and large number of activities for children. On some of the beaches you can find remnants from the past in the abandoned bunkers from World War 2. In 2017, the Tirpitz Museum designed by the renowned designer Bjarke Ingels opened in Blåvand. The museum is a portal to the secret treasures of the west coast. And unlike the colossal and invasive cement bunkers the Tirpitz is open and beautifully integrated in the dunes.

On the islands Rømø, Mandø and Fanø you can experience the powerful Wadden Sea. Here nature has the power. It is for instance only possible to go to Mandø at low tide. The Wadden Sea has a unique and rich wild life with especially migrating birds feeding on their way south. On Fanø you can see a large number of seals. If you plan to visit one or more of the islands it is a good idea to bring your bike. The islands have bike trails leading you through the countryside. All 3 islands also have amazing beaches. In Esbjerg, the biggest town of the region, has a lot of cultural offers and fine shopping possibilities. Visit the Esbjerg Art Museum or the Esbjerg water tower, one of the landmarks of the town. You may also try a seal safari at the east coast of Fanø or go by boat to Horns Rev Havmøllepark, (offshore windmill park) one of the biggest of its kind in the world. From Esbjerg you can go by ferry to Fanø.

Other guests recommend these homes in Rømø/Vesterhede: 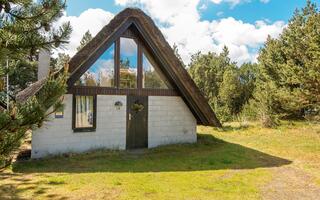 House no: 35514Rømø/Vesterhede6 persons,  80 m²2.4 km to coast.A holiday cottage with a thatched roof, located on a large, sheltered natural plot within walking distance of shopping and restaurants. The house has a spacious living room with a view of the property ...
Holiday home Rømø/Vesterhede X
As your arrival will be within short time, we ask you to book the holiday home by calling tel. no. +45 73 75 50 50.

Do you have a discount code ?